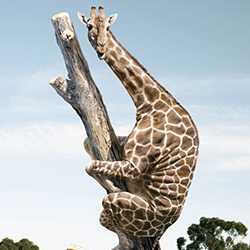 A neighbor befriend me when I moved to the burbs. She would comment we were best friends often. It was truly an adorable friendship of two married women supporting each other in day to day life of giggles, tea and lunches. One thing she did was always talk ill about everyone on our block when we were alone. The gossip she would reveal was painting my new neighborhood to be like the cast of Desperate Housewives. She would gossip on a range of topics of what’s happening to the neighbors, everything from married people cheating, people hiding they are getting foreclosed on, substance abuse, jealousy, bad parenting……

I valued her confiding in me and listened like a good friend, just thinking she needs to vent and needs an ear. However I should have seen red flags, meaning real red flags. But naïve me and also desperate me was so glad to have a new friend. I was new to the area and it was so hard making friends in this suburb and she was one the few people who reach out and became my friend. It felt so comforting and rewarding to have someone to hang with in an unsocial time in my life.

Well one  day a red flag did pop up. She was talking really bad about one neighbor, to the point I can’t even image her wanting to be in the room with her and thought wow how brutal can totally see why they don’t hang out and haven’t maintained a friendship.

Then the next day I call her to have lunch and hear she is having lunch with that very neighbor talking so nicely like they are best friends and discover they have lunch at least once a week. Thought it was very strange. I have a different philosophy if I talk bad about someone you will not see me hanging out with them. So to me this was odd behavior. At that point I did see a bit of a clear picture of who she was but still thought good thoughts about our friendship thinking it was genuine. Well it felt genuine.

At the same time I couldn’t understand why people in our neighborhood were sort of ignoring me and avoiding any contact, it was getting worse by the day. If I was near any of them it was like a dark cloud was looming over me or was wearing a sign saying “don’t be her friend, or talk to her what’s so ever and if you do keep it short and cold”

Then without any notice another neighbor who just moved to the block came over and told me “to watch my back this women, who claims you two are close friends isn’t a friend” and she is talking really bad about me. In my fashion I waited until the neighbor who I thought was my  true genuine friend would call processing this shock of why and nicely said “I need to talk to you, I thought we were friends but am hearing from other you are talking about me, and thought our friendship was more than that”

Well some people would say yes I messed up I am sorry I don’t want our friendship to ruin. However no she right away wanted to know who told me and then defended her self.  I didn’t feel it was right nor mattered who told me so didn’t reveal it. It was more important for her to know who betrayed pushing and pushing me for it, that was her only concern. There was no apology. The next day she called, I didn’t pick up the phone I wasn’t ready to talk to her I was pretty hurt and raw. She left a message saying she figured out who told me and again defended her self-leaving a long winded voicemail with no apology. It got much worse, she went even further to do a smear campaign about me, it sucks. I go for walks in my neighborhood and felt shunned for now going on three years, people who pretend they didn’t see me when I smiled or wave passing them. Neighbors stopped knocking on the door like they use to when we were friend. If they borrowed things of mine prior to this incident I discover the items with no note on the front door step, obviously left there with no doorbell ring or knock to avoid talking to me.

I also have the philosophy that if you are a good person it will shine through at the end of the day and presumed my neighbors would see the truth. Oddly why can’t my neighbors see the truth or are they scared she will do the same to them if they are nice to me.

But they don’t see the truth now three years going,  I am still shunned and somehow even though she moved away I see her on our block socializing often everyone is warm to her and cold to me.

At the end of the day it is about the quality of a friendship not how many you have. It sucks living in a neighborhood where you are treated like you are ignored when you simply smile and wave, or not included in neighborhood events while she not living here anymore is invited to all of them. However I do value the few genuine friends I have made outside of this neighborhood who live in the same suburb/city and wouldn’t trade them in for anything.